AAB architects is a design-led practice based in north London, providing a proactive architectural service tailored to individual client needs.

Established in 2000 by practice principal Alice Brown, the practice has kept its approachable, genuine nature, taking pride in positive working relationships with clients and consultants.

Predominantly working on educational, community and residential projects for a wide range of clients, the practice specialises in work to existing buildings, including reuse, repair and conservation. Committed to achieving imaginative and high-quality building design in an environmentally responsible manner, this approach is based on detailed analysis and understanding of clients’ aspirations.

Alice studied architecture at Cambridge University, where she graduated with a 1st class honours degree, and at the Harvard Graduate School of Design. Following completion of her diploma, Alice gained a range of experience in a number of renowned design practices, including Colin St John Wilson & Partners where she spent a year working on the British Library. At MacCormac Jamieson Prichard she was project architect for the upper ticket hall of the new Jubilee line station at Southwark and proposed overstation development.

Following success in a competition in Sweden, Alice set up her first practice, Loader and Brown architects (1994-99). The Swedish competition- to reuse a historic prison building for housing- was the catalyst for her subsequent specialisation in refurbishment, conversion and adaptation of existing buildings. In 2000 Alice set up AAB architects to develop her practice in new directions, supporting schools and community groups to raise funds for long term projects, such as the development of Duke’s Meadows in Chiswick.

Alice is interested in historic buildings and the evolution of cities. She has been a member of the Society for the Protection of Ancient Buildings since 1988 and is a RIBA accredited Conservation Architect. A continuing theme of her work has been the exploration of the value and potential of existing buildings. Recent projects have included works to adapt existing structures for temporary uses, including a school for deaf children and a temporary town hall both for London Borough of Camden.

Alice lives in north London with her husband and two children, and is involved in local environmental initiatives to address the challenges of climate change and the biodiversity crisis. 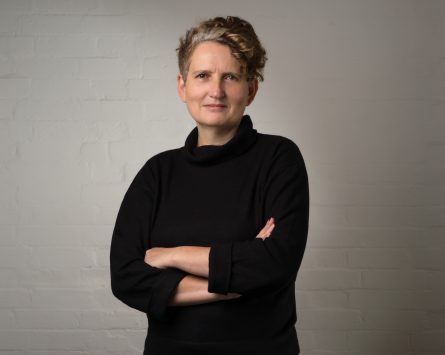